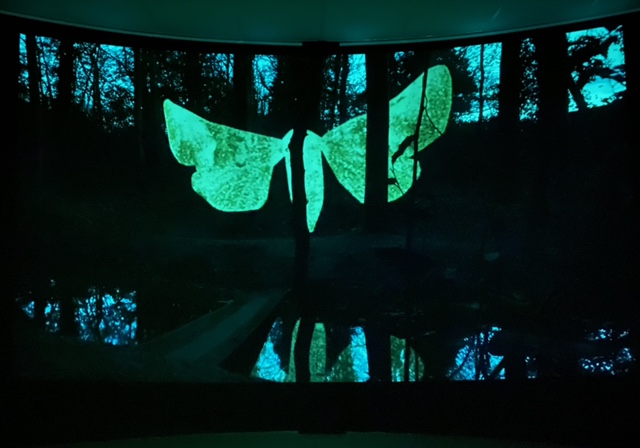 by Tina O’Connell and Neal White

During their residency in the AIR at Nieuw en Meer, and at Amstelpark, Neal White and Tina O’Connell have been exploring the nocturnal life of Moths and Bats. Their installation ‘Truth to Nature’, which can be seen in Het Glazen Huis in Amstelpark until the 19th June (part of the ‘Perfect Nature’ exhibition), is an installation that explores insect populations and moths in relation to light pollution and includes a soundscape of bats found in and around the park. As the central theme of their research extends out across the Netherlands, with its vast greenhouses that stay illuminated through the night, this presentation by Neal White in the Cantina and the AIR studio presents their work, with speculative ideas for cohabitation with nocturnal wildlife in which light is considered in terms of both human and more-than-human needs.

Tina O’Connell and Neal White are artists based in London. They both work in Universities (Reading, Westminster) where their artistic research is undertaken independently and in collaboration with one another. For more information on their work, which has been commissioned Internationally, please see their websites;

Details of opening; AIR Studio will be open from 19th June from 2-6pm. Neal White will give a presentation in the Cantina at 4pm, in which some of the ideas and projects are expanded.

Research has been supported by Nieuw en Meer, Zone2source and Mondriaan Funds.

Here is more info about Neal and Tina @AIR.